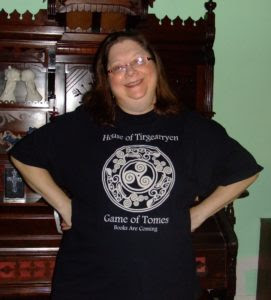 Dellani Oakes, a multi-talented woman, is the author of over a dozen award-winning novels. In addition to writing, she’s the host of a successful talk show, Books and Entertainment, where she often interviews authors, screenplay writers, and musicians. She owns and operates Tirgearr Publishing company, and in addition to all of that, she’s a substitute teacher, all while managing to take care of her family. How she manages to keep up and handle it all is truly beyond me, but I couldn’t wait to find out more about her work.
Dellani started writing early in life, first pursuing poetry, but soon added song parodies, short stories, and humorous essays to her writing world. By 2002 Dellani started writing full time. In addition to multiple standalone novels, she has also contributed to several anthologies. I’m fortunate to call Dellani a friend, but everyone that knows her will tell you that she is one of the most helpful and approachable authors that you will ever meet. I can’t wait to share my interview with you, and when you read her books, I promise you will not be disappointed.
Interview Questions

I think I have to go back to Wil VanLipsig to answer this. The Lone Wolf books begin in the year 3032. Wil is a Galactic Marine who was put through a series of medical experiments, which have made him virtually immortal. He’s lived 86 years, and doesn’t look a day over 30. With such a long and checkered past, he’s got a lot of baggage. It comes out at inconvenient times, causing him to overreact or go off the rails. More than once, I’ve been shocked at his actions. Then I have to realize that he’s acting well within his characteristics, and don’t reign him in. He knows what he’s doing (mostly) and his motives may not appeal to me, but they are legitimate. I feel if a character doesn’t go off the chain once in a while, I haven’t done a good job at creating him or her.
Nothing beats a great editor! We may think we’ve got the best book in the world, but if it’s full of grammatical errors and typos, it’s clearly not. Whatever an author might think about keeping their work pure and unadulterated, readers want to be able to read it easily. Nothing kicks me out of a story more than errors in the text.
Also, don’t let the How-To books, articles, websites scare you. Tell the story your way. Don’t listen when someone says you can’t write in the first person, or in present tense. Tell the story the way it wants to be told. Get it finished, then go back and fix it. Any issues it has can be mended in editing. Let me reiterate my first bit of advice, find a good editor. If you can’t afford one, find a friend who is good with grammar, and ask for a favor. Many other authors will trade like for like, if you read mine, I’ll read yours. It’s helpful to have other opinions.
Finally, don’t let it get you down. You’re not going to make instant money. You’re not going to be the next Fifty Shades or Twilight—well, you might, but those are rare. Write what moves you, do your best, and keep going. Writing is an extension of yourself, do what makes you happy, and don’t worry about anything else.
Visit Dellani Oakes
Please follow and like us: